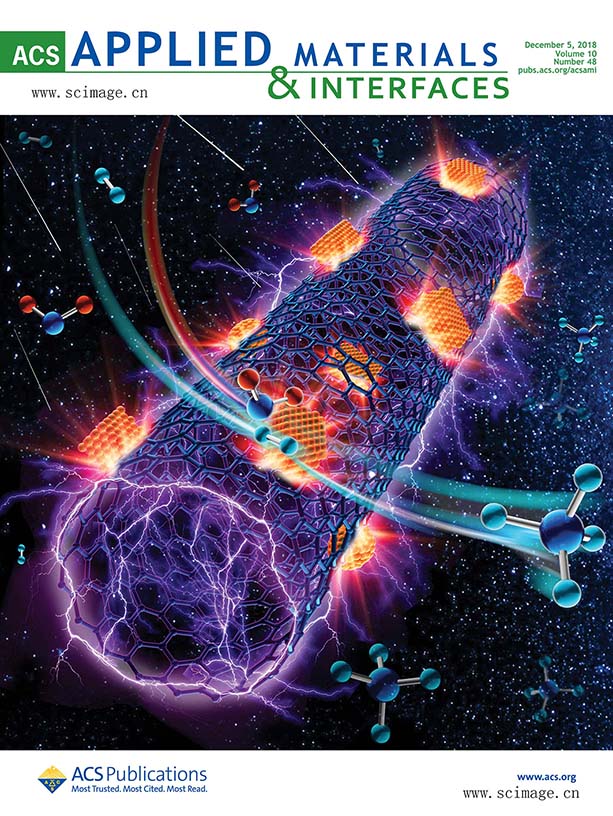 摘要
Mn-promoted Ni nanoparticles (NPs) supported on oxygen-functionalized carbon nanotubes (CNTs) were synthesized for CO2 hydrogenation to methane. This novel metal–carbon catalytic system was characterized by both experimental and computational studies. An anomalous metal–support interaction mode (i.e., a higher temperature would lead to a weakened Ni–CNT interaction) was observed. Deep investigation confirmed that surface oxygen groups (SOGs) on CNTs played a key role in tuning the Ni–CNT interaction. We proposed that high calcination temperature would firstly lead to the decomposition of SOGs (>400 °C), then causing a loss of anchoring sites and the anchoring effect of SOGs on Ni NPs, thus cutting off the connection between interfacial Ni atoms and CNT body, resulting in the migration and coalescence of fine flat Ni NPs into larger sphere ones at 550 °C (geometric effect). Density functional theory calculation study clarified that this kind of anchoring effect stemmed from the formation of covalent bonding between the interfacial Ni atom and C or O elements of SOGs, causing the electrons to be transferred from Ni atoms to CNT support because of the intrinsic electronegativity of −COOH (electronic effect). Besides, Mn promotion notably boosts the activity compared with unpromoted catalysts, which was irrelevant to the size effect, but enhanced CO2 adsorption and conversion according to the result of CO2-temperature programmed desorption and transient response experiment. The optimized NiMn350 catalyst endowed with Mn promotion and robust Ni–CNT interaction showed both high activity and sintering resistance for more than 140 h. Our findings paved the way to reasonably design the metal–carbon catalyst with both high activity and stability.